skip to main | skip to sidebar

Trying to Reason with Hurricane Season 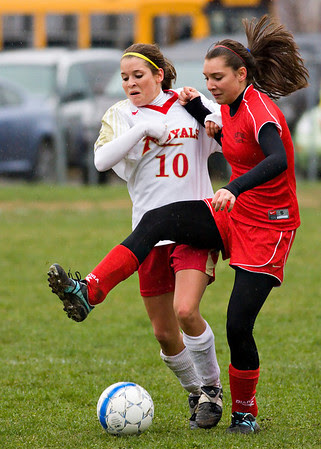 Alright, alright- Hurricane may be an exaggeration, but let's face it- Our girls are out there in some pretty marginal weather. Tuesday was no exception, as the Lady Royals squared off against the Crestwood Comets for the second time this season, this time in a cold rain. The earlier match was a closely fought battle, with your Royals emerging with a narrow victory. This one was shaping up in a similar fashion, with both teams exchanging early goals on restarts, then HR creeping out to a 2-1 halftime advantage. The second half was a different story, with Redeemer opening up what would end up as a 6-1 lead over visiting Crestwood.

After a couple of disappointing outings, this was a much needed victory for the Lady Royals. Sources report that this cements a hold on a playoff spot, for now anyway. Assuming a similar second half to the season, it seems like the two Coughlin games could make a big difference in seeding- so there is plenty of excitement left!

As always, a few observations-

Apparently, Hope is a hugger. For 2 seasons now. Gotta love the emotion.

I have been watching Alyssa Mocion play for at least two seasons, plus some indoor. I don't think I have ever seen another player dribble past her. I have to assume that it has happened- but I won't believe it until I see it.

Earlier in the year, I promised Christina some more photos, in a game where we needed her. Promise kept.

Emily playing midfield was new for me. Not that my opinion matters, but I liked it.

A rough day for Jessica. In this shot, it looks like she is about to head the ball- what you can't really tell is that number 16's elbow is going to hit her in the face at about the same time. Minutes later, she was robbed of a goal after a defender handled a ball heading into the net. I am sure she will bounce right back for the next game regardless.

More fun is ahead, I am sure. Round 2 with Dallas on Thursday, then, "Mr. Fink, It's Coughlin" on Friday.

Oh yeah- with regard to the title, I am sure you will all be happy when I get through the Buffett albums. Don't hold your breath- I was a Parrothead long before it was hip to be one.

Site is here.
Posted by Steve Finkernagel at 11:47 PM

Where can I buy some very cool photos?

FotoFink.net is actually getting a little crowded. It is my hope to use this blog as a running commentary, and to direct the FotoFink faithful to the most recent galleries on the site.

Basically, if you want my rants, raves, and completely biased opinions, along with links to the most recent galleries, start here. if you just want to buy some pictures (I can respect that) you can still go right to FotoFink.net.

Please feel free to comment- let's have some fun with this!